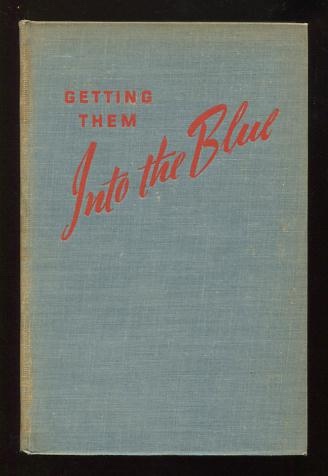 Getting Them Into the Blue

(no dust jacket) [light shelfwear, spine cloth somewhat faded, small bookseller's label ("Sold by The Methodist Publishing House, Nashville") at bottom corner of front pastedown; although the full jacket is not present, the complete text from has been neatly trimmed from both flaps, and the two pieces are laid into the book]. (B&W photographs, diagrams, drawings) The third published book by Gann, later the author of such aviation-themed epics as "Island in the Sky" and "The High and the Mighty." Like his other early works, this was written for juvenile (e.g. young adult) readers, and tells "the story of how planes are planned, how they are made, how they are powered. In fact, this is the entire thrilling story of airplanes -- the best airplanes in the world -- in their progress from the drafting boards and mock-ups through our great factories out into the sky." Although the content has been appropriately simplified for its intended readership, it doesn't give the impression of being "dumbed down"; it does seem clear, though, that the book is in some measure a recruiting tool, intended to get its young (but not that young) (and mostly male) readers excited about flying in a wartime context.

Title: Getting Them Into the Blue

Getting Them Into the Blue