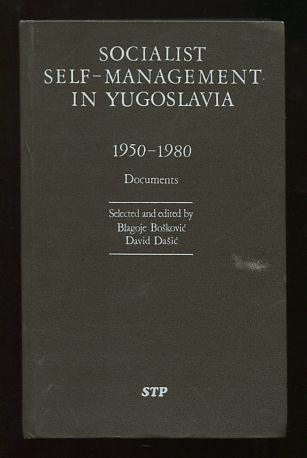 (no dust jacket, probably as issued) [very slight bumping to bottom corners, tiny scuff mark on front cover, no other significant wear]. Essays, speeches (many by Josip Broz Tito), official documents, government reports, etc., documenting "one of the greatest historical achievements of the working class and all working people in their long, organized revolutionary struggle to build socialism in Yugoslavia," which per the book's introduction had in its 30-year history "emerged as the dominant socioeconomic relationship, as the heartbeat of the social, economic and political being of socialist Yugoslavia, as an ideology and a way of life [as well as] a permanent and inalienable guarantee of the status, rights and responsibilities of working people." (Wonder how that's been going for them since 1980?) The text is entirely in English, very helpful if we want to give this system a shot here, after the revolution.