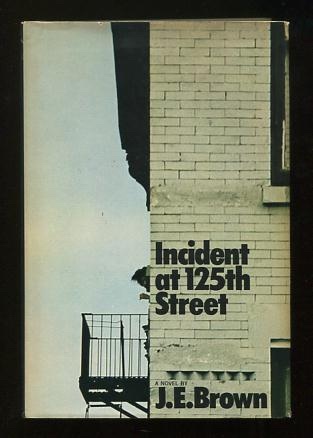 [light age-toning to edges of text block, spine very slightly turned; jacket shows minor wear at extremities, a couple of tiny closed tears along top edge]. Novel about a middle-aged New York executive who comes to the aid of an elderly man who's being mugged by three young punks on a commuter train platform in Harlem; in the ensuing scuffle, one of the muggers falls to the street below. At first the executive is "publicly commended for his courageous act -- until the injured boy died and his father pressed manslaughter charges, setting in motion a bizarre chain of events. Is David Martin [the executive] a hero or a villain? A conscientious citizen or an abusive drunk? The incident is examined from many angles. A hard-bitten cop, a determined newspaperman, the boy's bitter father, a reluctant witness to the attack, all tell their stories, until their bits and pieces fall together and the truth is laid bare." The novel was adapted (and the locale changed) for the 1971 TV-movie INCIDENT IN SAN FRANCISCO, starring Richard Kiley and Leslie Nielsen.