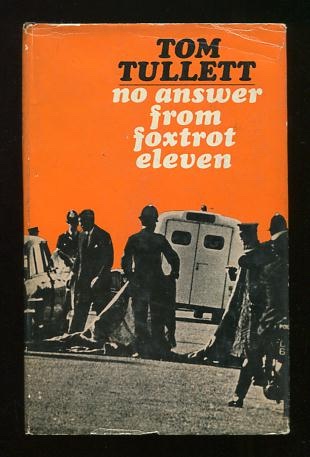 No Answer from Foxtrot Eleven

(price-clipped) [minimal shelfwear to book; jacket lightly stained on spine, short closed tear and associated creasing at top right corner of front panel, a bit of wear along bottom edge]. (B&W photographs) True-crime reportage, about the cold-blooded murder of three British policemen in August 1966 and its aftermath, covering the intensive manhunt that led to the capture of the killers, as well as their trial and conviction. The author, an ex-Scotland Yard investigator who later became one of Fleet Street's most renowned crime reporters, "was in on [the case] from the beginning, talked to the families of the murderers and their victims, [and] was in close contact with the police throughout." The case, known as the Shepherd's Bush murders (and also as the Massacre of Braybrook Street), sparked a great deal of outrage in the U.K., including calls for the then-recently-abolished death penalty. Of the three men who were ultimately convicted of the murders, one died in prison, another was released but was later beaten to death by a flatmate, and the third (Harry Roberts) was finally released in November 2014. A very scarce book.

Title: No Answer from Foxtrot Eleven

No Answer from Foxtrot Eleven