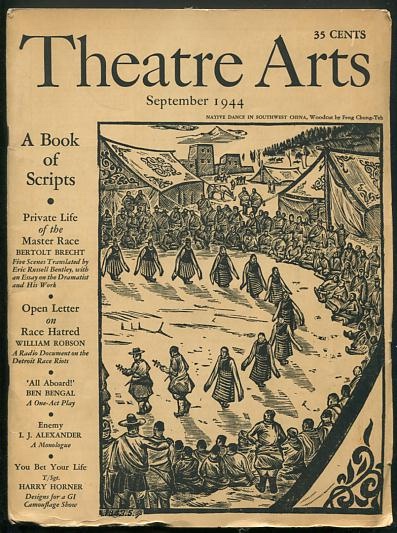 "The Private Life of the Master Race" (in Theatre Arts, issue of September 1944)

[generally a nice clean copy, with a bit of bumping to the edges of the covers, inevitable due to the cover slightly overlapping the magazine's pages]. (B&W photos, facsimiles, drawings, etc.) Special issue of this popular theatrical magazine, entitled "A Book of Scripts." The English version presented here of the Brecht piece (translated by Eric Russell Bentley, and accompanied by his essay on Brecht and his work) is actually a partial work: a prefatory note explains that the play "consists in its entirety of seventeen scenes," although only five are included here. (The five are: "The Informer"; "The Old Nazi"; "Two Bakers"; "The Farmer Feeds His Sow"; and "The Sermon on the Mount.") The play -- "Furcht und Elend des Dritten Reiches" in German ("Fear and Misery of the Third Reich") -- the action of which takes place during the period 1935-1937, was Brecht's first openly anti-Nazi work, and "gives a picture of the New Order which Hitler introduced and tested in Germany and maintained by his divisions throughout Europe." (It had its premiere in Paris in 1938, at a time when Brecht was living in Denmark, having wisely gotten out of Germany when Hitler came to power.) In addition to the Brecht piece, the other scripts published here are: "'All Aboard!' by Ben Bengal; "Enemy -- A Monologue" by I.F. Alexander; and "Open Letter on Race Hatred: A Radio Document" by William N. Robson. There is also a report on the presentation of a "camouflage show" called "You Bet Your Life," which was presented at March Field, California; it's illustrated with sketches by T/Sgt. Harry Horner, who went on to a distinguished career as a designer for theatre and motion pictures. There are numerous illustrations throughout the magazine, quite a few from contemporary plays and films, with the highlights including: a woodcut (the cover illustration by Feng Chung-Teh) illustrating a native dance in southwest China; a reproduction of a painting by Luis Quintanilla, a kind of thematic parallel to the Brecht play; a sketch of Ivan the Terrible, in connection with the Sergei Eisenstein film; a really wacky still from a stage musical, "Helen Goes to Troy," depicting a polka-dotted Trojan Horse.

Title: "The Private Life of the Master Race" (in Theatre Arts, issue of September 1944)

"The Private Life of the Master Race" (in Theatre Arts, issue of September 1944)