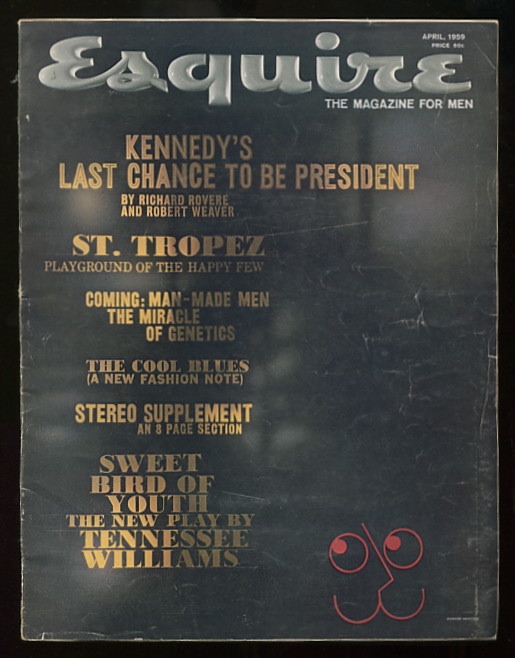 "Sweet Bird of Youth" (in Esquire: The Magazine for Men, issue of April 1959)

[moderately worn, short separation of front cover at bottom of spine (less than one inch), miscellaneous minor creasing to covers]. (B&W/color illustrations, ads, etc.) The highlight of the issue is the first publication of the Williams play. (The original Broadway production, starring Paul Newman and Geraldine Page, had only just opened in March, and the New Directions hardcover edition of the play wasn't published until December.) A small-print notice informs us that "this is the author's original working script and is subject to production changes." Another significant piece contained in this issue is a frank assessment by Richard H. Rovere of John F. Kennedy's Presidential prospects, entitled "Kennedy's Last Chance to be President." Also of interest: a cartoony pictorial essay (by Harvey Kurtzman, of all people) about a visit to Ireland by James Cagney; an article by Sybille Bedford about the 1957 murder trial of Dr. John Bodkin Adams, a sort of condensed version of her book "The Trial of Dr. Adams"; an article looking into the newest advances in the area of genetics; and book reviews by Dorothy Parker, who finds much to admire in three novels, including Romain Gary's "Lady L," and in Ms. Bedford's book about the Adams trial.

Title: "Sweet Bird of Youth" (in Esquire: The Magazine for Men, issue of April 1959)

"Sweet Bird of Youth" (in Esquire: The Magazine for Men, issue of April 1959)