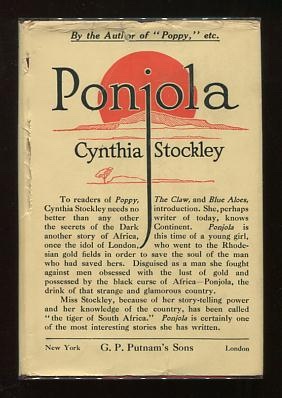 [nice tight clean book, just a touch of wear to base of spine; jacket worn along top edge with a couple of small tears, short closed tear at bottom of front panel, an approximately 2" puncture-tear along front hinge, a handful of tiny puncture-tears on the spine, and (most seriously) an irregular strip (about 2" x 3/8") torn away from the bottom left corner of the rear panel (but not affecting any text thereon)]. "Another story of Africa, this time of a young girl, once the idol of London, who went to the Rhodesian gold fields in order to save the soul of the man who had saved hers. Disguised as a man she fought against men obsessed with the lust of gold and possessed by the black curse of Africa -- Ponjola, the drink of that strange and glamorous country." The author, born Lilian Julian Webb in London in 1862, was a resident of Rhodesia (now Zimbabwe) from 1896. She achieved international recognition with the publication of her story collection "Virginia of the Rhodesians" in 1904, and went on to great success as the author of numerous novels, novelettes and short stories, mostly with African settings, a number of which were adapted as silent films. She committed suicide in 1936, and has subsequently been largely forgotten and/or ignored, although one critic of her work feels that her "rightful position is as a precursor to Doris Lessing's African tales." A number of Stockley's books and stories were adapted for the movies during the silent-film era; this one served as the basis of the 1923 First National film of the same name, starring Anna Q. Nilsson and James Kirkwood.