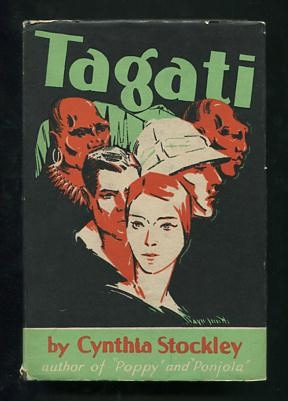 [nice clean solid book, minor shelfwear to bottom edge; jacket has a small tear at top rear hinge, tiny chunk missing at bottom front hinge]. A story of love, murder and suicide, described by one critic as "atmospheric to the verge of mystical." The novel concerns a woman named Felicia Lissell, who travels to Rhodesia with her aunt, to visit the farm of Dick Cardross, but she doesn't suspect that "dangerous social complications awaited her in the gay English colony nearby." It seems that "Stella Cardross, her hostess, was a tiger woman who had long since been unfaithful to her husband in the purple of mad African nights. She considered both Paget Vyner and Patrick Fenn, co-owners of the Tagati mine, to be her own particular property, and brooked no disturbance of her admiring retinue. Felicia, however, was young and unspoiled, with a beauty that had the power to fire men's blood. Vyner and Fenn immediately fell desperately in love with her," thereby fully arousing Stella's jealous rage. The author, born Lilian Julian Webb in London in 1862, was a resident of Rhodesia (now Zimbabwe) from 1896. She achieved international recognition with the publication of her story collection "Virginia of the Rhodesians" in 1904, and went on to great success as the author of numerous novels, novelettes and short stories, mostly with African settings, a number of which were adapted as silent films. She committed suicide in 1936, and has subsequently been largely forgotten and/or ignored, although one critic of her work feels that her "rightful position is as a precursor to Doris Lessing's African tales."