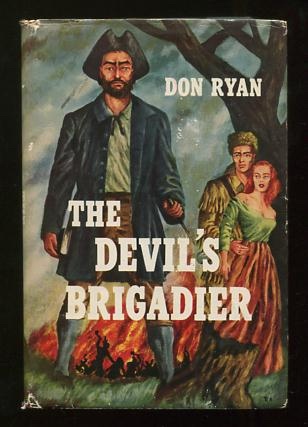 [good solid book, age-toning to edges of text block, literary agency label (MCA Artists Ltd.) on ffep; jacket has small tears and slight paper loss at corners and both ends of spine]. "This is a story of violence, intrigue and revenge in the days just after the [American] Revolution when immigrants were pushing over the Allegheny Mountains to wrest possession of the rich new lands from the Indians, and when a small group of Spanish noblemen schemed with renegade Americans to seize the entire territory west of the mountains for their king." The novel's protagonists, brothers Elijah and Matthew Heath, were based on the Harpe brothers, described by Wikipedia as "murderers, highwaymen, and river pirates, who operated in Tennessee, Kentucky, Illinois, and Mississippi, in the late eighteenth century [and] are most likely the United States' first known serial killers." Ryan published a couple of novels in the 1920s (including the legendary L.A.-set experimental novel "Angel's Flight"), then detoured into screenwriting (with a couple of dozen credits, for mostly forgettable Westerns and "B" pix, between 1926 and 1941), before returning to his literary pursuits; although he lived until 1978, this was to be his last published book.