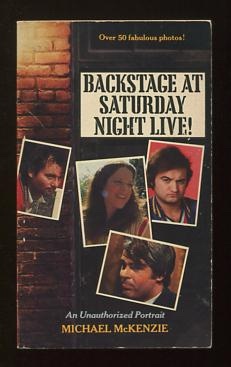 [moderate edgewear to covers]. Mass Market PB (B&W photographs) INSCRIBED "To Joyce, who mothered the / four cover rascals!" and SIGNED by the author on the title page. An early behind-the-scenes book (perhaps the first?) about the long-running comedy sketch show, published just at the twilight of what we now think of as the "classic" first five years. This is of course a cleaned-up-for-Scholastic-readers version (no drugs or infighting here, oh no!), and the breakup of the original cast, although already well underway (Dan Aykroyd and John Belushi had departed after the 1978/79 season) is somewhat soft-pedaled here: there are individual profiles of nine performers, sub-grouped as "The Family" (Gilda Radner, Bill Murray, Jane Curtin, Laraine Newman, and Garrett Morris) and "Special Cousins" (Chevy Chase, Steve Martin, Belushi, and Aykroyd), with an additional short chapter about Al Franken and Tom Davis, who had been "featured players" since the 1977/78 season. [I've been unable to determine who "Joyce" was, although the inscription suggests that she was someone involved with the production of the show.] Signed by Author