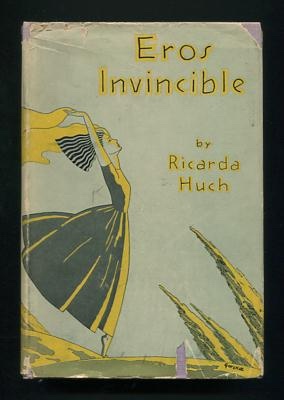 Eros Invincible (translated from the German with an Introduction by William A. Drake)

(price-clipped) [solid book with very slight fraying to cloth along bottom edge of rear cover, minor fading to cloth at spine ends; jacket edgeworn and moderately faded, with a small chip at upper right-hand corner of front panel, another skinny chip at bottom of front panel (about 1/4" wide and 3/4" tall), slight paper loss at spine ends, various other tiny nicks and creases]. Although the last (of just four) of this major German writer's books to appear in English translation, it was actually her first novel, originally published in 1893 as "Erinnerungen von Ludolf Ursleu dem Jüngeren" ("Memories of the Younger Ludolf Ursleu"). Per the blurb, it's "the story of a love that grew to overwhelming intensity and gained strength from being forbidden." (Short version: Cousins in Love.) It was reportedly somewhat shocking in its day, possibly due not only to the boldness of its theme but also because she adopted a male narrative voice. The translator, in his introduction, justifies the "Eros Invincible" title by evoking Helen of Troy and Eurpides, and claiming that the author's "spirit is so utterly Greek" -- but personally I think it was probably the work of some Macaulay editor, in search of a sexy title. Huch, whose best-known book was probably "Der Fall Deruga," published in 1917 (and in the U.S. in 1929 as "The Deruga Trial"), had been one of the first women to earn an advanced degree (in 1890) from the University of Zurich, which she attended because women were not eligible for such degrees in Germany. She went on to a distinguished career as a historian, novelist, poet and playwright, and was dubbed "the First Lady of Germany" by no less than Thomas Mann. Already in her late sixties when Hitler came to power, she remained in Germany despite her distaste for the Third Reich, and managed to survive throughout the entire period, essentially by retiring to private life and (mostly) keeping quiet. She lived long enough to serve as honorary president of the First German Writers Congress in Berlin in 1947, the year she died at the age of 83. Additional fun fact (in the life-imitating-art subcategory): one of her marriages was to her cousin and one-time brother-in-law, the writer Richard Huch.

Title: Eros Invincible (translated from the German with an Introduction by William A. Drake)

Eros Invincible (translated from the German with an Introduction by William A. Drake)