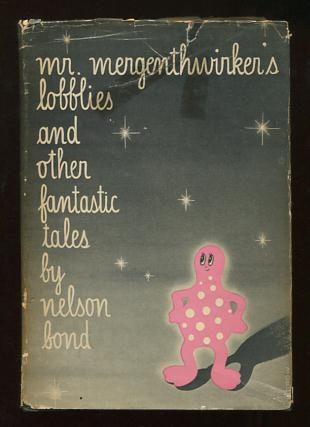 [a bit of shelfwear to bottom edge, slight exposure of board at bottom front corner; jacket is edgeworn with various small tears, ragged diagonal tear at top of front panel (with some bleed-through staining from old internal tape-repair), narrow strip torn away at top of rear panel, extending a bit into top of spine]. Collection of 13 fantasy/SF-ish stories, the first book by this prolific pulp-fiction writer who later branched out into radio and television. The title story, about a milquetoasty little man and his invisible compansions, was Bond's first big success; it originally appeared in Scribner's Magazine in 1937 and had been much reprinted and broadcast (in various radio verisions, including a 1938 series), and would soon (as noted in the jacket blurb) find its way onto television as well. (It was staged three times for live TV, in 1946, 1949 and 1953; the first of these broadcasts has been referred to as "the first full-length play presented on network television," although I hesitate to endorse that claim without doing a little more research.) Reportedly, however, Bond was hampered in his attempts to sell it to the movies due to its similarities to the Broadway hit "Harvey" -- even though the original "Lobblies" story predated "Harvey" by a good seven years. Especially amusing (to me, anyway), in light of the fact that later in life Bond quit writing and became an antiquarian bookseller, is the final tale in this volume: entitled "The Bookshop," it's about a mysterious shop that's revealed to the story's writer-protagonist to be "the imperishable library of might-have-been" books -- including his own.