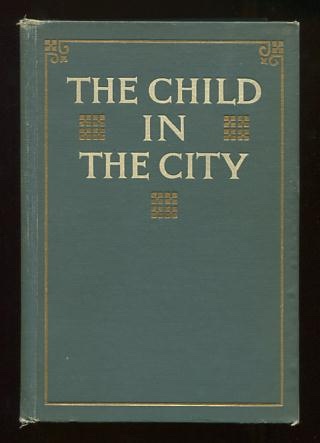 The Child in the City: A Series of Papers Presented at the Conferences Held During The Chicago Child Welfare Exhibit

(no dust jacket) [moderate wear at extremities, both hinges cracked (the front more severely than the rear), private "Ex Libris" bookplate on front pastedown; all photographic plates are present (one illustrating the beginning of each major section of the book), but one is detached from the binding]. (11 B&W photographic plates) A collection of papers presented at the conferences referenced in the book's subtitle, held during two weeks in May 1911. Following some introductory matter (including the comments of Jane Addams regarding the "Opening of the Exhibit"), the papers are organized under nine subject headings: Personal Service; Physical Care; The School and the Child; Special Groups of Children (including "The Claim of the Colored Child" by Booker T. Washington); The Working Child; The Law and the Child; Libraries and Museums; Social and Civic Problems of Childhood; and "The Uncompleted Task." Other notable contibutors include Lillian D. Wald of the Henry Street Settlement in New York, and Roger N. Baldwin, then representing the Civic League of St. Louis but later to become a founder and the first executive director of the ACLU. In addition to her introductory remarks, Jane Addams also contributed a paper on "The Hull-House Labor Museum." Befitting the Chicago-ness of this noble enterprise, the McCormick name seems to have been all over the thing: the introductory remarks were by Cyrus H. McCormick [Jr.], while the conferences' (and the book's) last words were delivered by Harriet H. McCormick and Anita McCormick Blaine, Cyrus's wife and sister, respectively. (The photographic illustrations, by the way, appear to be photos of display boards on the various topics that were used at the conferences; unfortunately, this means that most of the individual images depicted thereon (as many as ten on some pieces) are too small here to make out any significant detail.)

Title: The Child in the City: A Series of Papers Presented at the Conferences Held During The Chicago Child Welfare Exhibit

Publisher: Chicago, The Department of Social Investigations/Chicago School of Civics and Philanthropy: 1912

The Child in the City: A Series of Papers Presented at the Conferences Held During The Chicago Child Welfare Exhibit