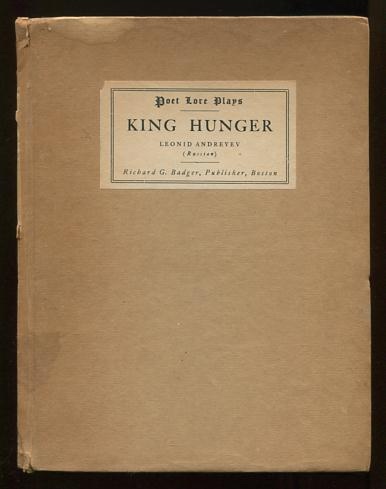 By: Andreyev, Leonid (translated from the Russian by Eugene M. Kayden)

(no dust jacket; paper spine and front cover labels) [small stain at lower left front cover near spine, light dampstain at left top edge of front cover, slight cracking of spine covering at both ends of spine; "Property of The Theatre Guild, Inc., Garrick Theatre, N.Y.C." stamped on ffep]. (Poet Lore Plays) Series Russian play, issued in a periodical entitled "Poet Lore." In addition to the text of the play itself, this volume also contains: "The Significance of Maeterlinck's Bluebird," an essay by Emily S. Hamblen, and "The Gate of Wishes," a short play by Mary MacMillan. Of note: this copy bears a colorful vintage bookseller's label on the rear pastedown -- one of the most attractive I've ever seen -- from the legendary New York bookshop The Sunwise Turn, located at 2 East 31st Street. This establishment, described by one contemporary observer as "the prototype of all great-hearted bookshop experiments in a metropolis," and by a later writer as "high minded, eclectic, and expensive," was opened in 1916 by two ladies named Madge Jenison and Mary Mowbray Clarke, with an unusual business model: to survive not on foot traffic but rather through soliciting the patronage of fifty well-heeled individuals who would each buy $500 worth of books a year. The proprietors also did a little publishing (of works by Rainer Maria Rilke, Alfred Kreymborg, Lord Dunsany, and others), hosted readings, and sold textiles, artwork, and stationery in addition to books. At some point it relocated from its original place on East 31st Street to a spot just opposite Grand Central Station, at which time it was described as "a beacon of elite taste in the city’s most public location." The enterprise was bought, and the store closed, by Doubleday & Co. in 1927. (There is actually a book about the shop, "Sunwise Turn," written by Ms. Jenison in 1923.)