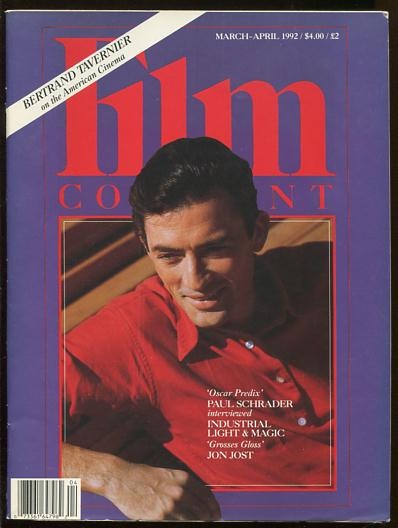 [light edgewear to covers; see Notes about special appeal page, bound in]. (B&W photographs) Included in this issue: an interview with French director Bertrand Tavernier, focusing on his appreciation for the classic American cinema; a special section, "The World in His Arms," saluting that year's AFI Life Achievement Award recipient, Gregory Peck; an analysis of the Australian film PROOF, directed by Joceyn Moorhouse; a history and appreciation of the contributions of Industrial Light and Magic to cinema special effects (but also including a list of "Ten Great Effects Films Since STAR WARS Not by ILM"); several pieces about Jon Jost and his then-current film ALL THE VERMEERS IN NEW YORK; an article by Scott Eyman about the early years in Hollywood of the deMille/DeMille brothers (William and Cecil); an interview with writer-director Paul Schrader; an examination of some recent Canadian films; an obituary of critic Stuart Byron; a spirited exchange of letters to the editor on the topic of alleged racism in Kevin Costner's DANCES WITH WOLVES. [NOTE that bound into the magazine in the front is a special appeal from the editor, addressed to former readers/subscribers of the recently-discontinued American Film magazine, to give Film Comment a try.] ***NOTE ALSO that we have many more issues of this title (and other film magazines) in stock, and welcome your inquiries.