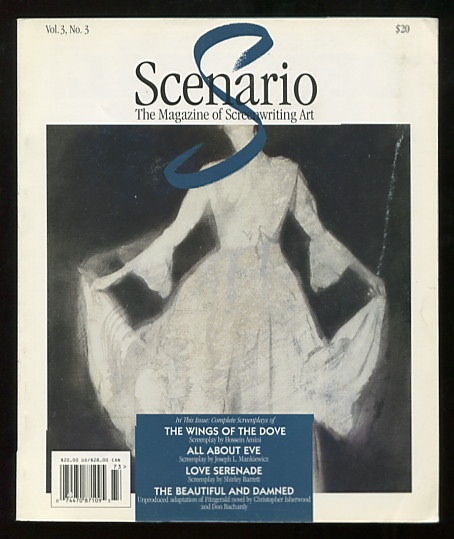 Scenario: The Magazine of Screenwriting Art (Fall 1997) [includes ALL ABOUT EVE and THE BEAUTIFUL AND DAMNED]

[very light handling wear, teensy bump to bottom right corner of front cover, a little scuffing along edges of rear cover]. A terrific issue of this generally terrific (and now sadly defunct) publication, featuring one of the great screenplays of Hollywood's golden age -- ALL ABOUT EVE by Joseph L. Mankiewicz -- and what to my mind is one of the most intriguing unproduced scripts that the magazine ever printed: THE BEAUTIFUL AND DAMNED, an adaptation by Christopher Isherwood and Don Bachardy of the novel by F. Scott Fitzgerald. Mankiewicz was unavailable for the usual accompanying interview (being dead and all), but they reprint one from 1972, along with a brief biography and short interviews with his son Tom Mankiewicz and actress Celeste Holm, she who suffered from the machinations of both Bette Davis and Anne Baxter in EVE. The Isherwood/Bachardy/Fitzgerald script is accompanied by an interview with Bachardy and excerpts from Isherwood's then-unpublished journals. All of the foregoing is worth the price of admission, so to speak, but there are two other screenplays to round out the issue -- THE WINGS OF THE DOVE (by Hossein Amini, from the Henry James novel) and LOVE SERENADE (by Shirley Barrett), both with the requisite interviews with writers and directors (in the latter case, she's both). The Keynote Essay, by Christopher Durang, is entitled "We Talked in Sentences Then!"

Title: Scenario: The Magazine of Screenwriting Art (Fall 1997) [includes ALL ABOUT EVE and THE BEAUTIFUL AND DAMNED]

Scenario: The Magazine of Screenwriting Art (Fall 1997) [includes ALL ABOUT EVE and THE BEAUTIFUL AND DAMNED]