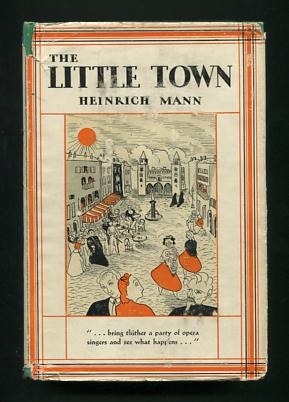 By: Mann, Heinrich (translated from the German by Winifred Ray)

[book has just a touch of wear at the extremities, vintage price sticker (from The White House, San Francisco department store) on rear pastedown; jacket heavily rubbed and scuffed (especially on rear panel), paper loss at both ends of spine, numerous tiny edge-nicks]. Novel about an "undisturbed" small town which is visited, and awakened, by a traveling opera company; originally published in Germany in 1909 as "Die kleine Stadt." The elder brother of Thomas Mann, the author is probably best known for his 1905 novel "Professor Unrat" (published much later in America as "Small Town Tyrant"), which served as the basis for the film THE BLUE ANGEL.

Author: Mann, Heinrich (translated from the German by Winifred Ray)