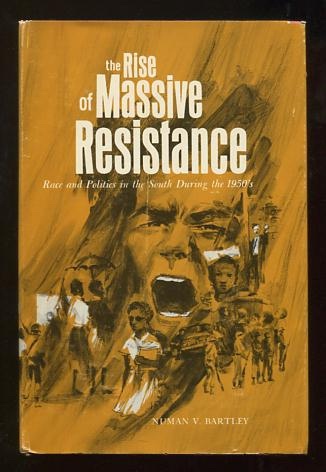 The Rise of Massive Resistance: Race and Politics in the South During the 1950's

(price-clipped) [moderate shelfwear to book, previous owner's commercial bookplate on front pastedown; jacket a little edgeworn, a bit of paper loss at both ends of spine, light soiling to rear panel]. (B&W photographs) A history of the early Civil Rights era in the South, focusing not directly on the movement itself but rather on the fight put up against it by the segregationist/white supremacist elements in the region. In the book, blurbed as "the first scholarly work to deal definitively with the politics of southern resistance to public school desegregation," "the author views southern politics and race relations broadly, defining the basic patterns while at the same time recognizing the immense variety of attitudes in the region. As an examination of the opposition to social change, the study focuses on the more conservative aspects of southern politics."

Title: The Rise of Massive Resistance: Race and Politics in the South During the 1950's

The Rise of Massive Resistance: Race and Politics in the South During the 1950's