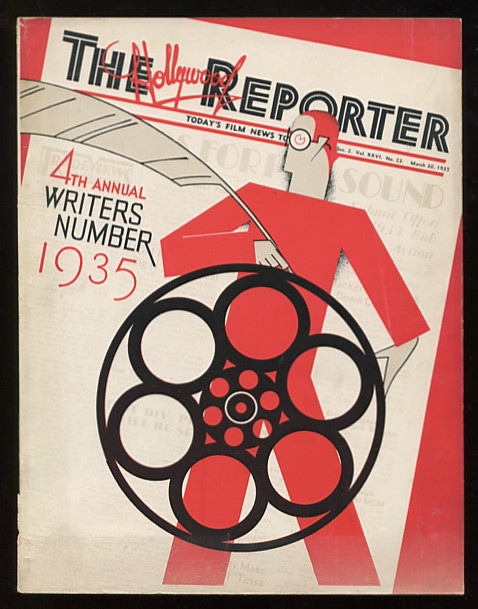 [minor edgewear to covers, slight fading along bottom edge of front cover]. (advertisements) This special "Writers Number" of the erstwhile Hollywood trade paper features 22 short pieces of various types -- stories, playlets, mini-essays, anecdotes, humorous jibes, etc. -- contributed by both prominent and not-so-prominent screenwriters (or, in some cases, regular writers in town to scoop up some of that easy movie money). Featured writers include Philip Wylie, Nunnally Johnson, Edward Chodorov, Ralph Block, Melvin Levy, George Seaton & Robert Pirosh, Dwight Taylor, and Edwin Knopf. Among the more amusing pieces, at least at quick glance, are: "Mother Goose Flies High" by John B. Myers, using nursery rhymes as the inspiration for story pitches ("Little Bo Peep" as a starring vehicle for Claudette Colbert and Gary Cooper, for instance); "The Bard Comes Back" by Charles Kenyon, in which William Shakespeare pops around to the First National studios to see how they're handling their adaptation of "A Midsummer Night's Dream"; "Zolly Gets Africa" by Jeffrey Dell, a brief snapshot of Zoltan Korda and his methods of filming in Africa; and "How Long is This Going On?" by Nunnally Johnson, a brief playlet mocking the "widely-publicized behavior of non-professionals in the vicinity of Hollywood." Also includes a credits section, "Writers and Their Work for 1934" (with a separate, smaller section for British writers). Most of the writers whose work is contained in this issue seem to have also taken out advertising space (one suspects a quid pro quo at work) to tout their most recent credits and/or works in progress, announce which studio they're under contract to, and just basically demonstrate that they're ready, willing and able to scribble. This was, of course, a highly competitive (and highly lucrative) time to be a writer in Hollywood -- and it's in that regard it's interesting to note, on page 36, a full-page ad for H.N. Swanson, Inc., an agency that had opened just four months earlier with the stated intent to handle only writers and story properties, and could already brag that "during the past few weeks we believe we have sold to the studios more plays, novels and original stories than any other Hollywood agency."