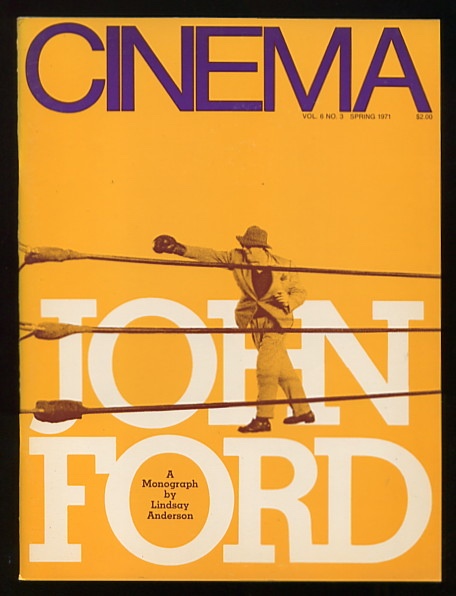 [nice clean copy, very slight bumping at spine ends, minor wear along spine]. (B&W photographs) The cover feature is "John Ford; a monograph by Lindsay Anderson" (originally written in 1955 but here published for the first time; later revised, in book form, as "About John Ford"). Also in this issue: an article on THE RISE OF LOUIS XIV (Roberto Rossellini); "The Electric Film-Maker" (re new forms of television exhibition); a short interview with, and several reminiscences of, Kenji Mizoguchi; an analysis of the films of Robert Bresson; "Slut Bitch Virgin Mother--The Role of Women in Some Recent Films" (especially THE GRASSHOPPER and DIARY OF A MAD HOUSEWIFE); and reviews of THE PRIVATE LIFE OF SHERLOCK HOLMES (Billy Wilder), SHARK (Samuel Fuller), and FIVE EASY PIECES (Bob Rafelson). There is also a book review of "Negative Space" by Manny Farber, which includes a very helpful bibliography of articles written by Farber that were not included in that anthology.