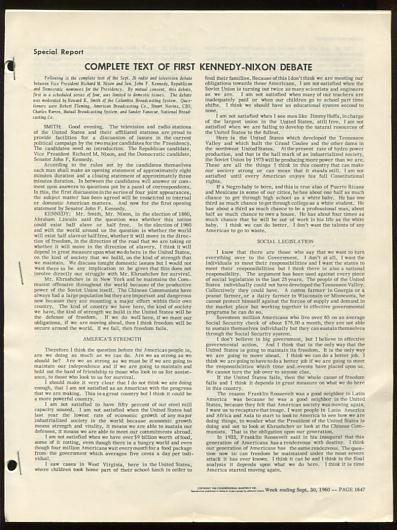 Complete Texts of the Kennedy-Nixon Debates

[light handling wear only]. This is an assemblage, I guess you'd call it, of the relevant pages from four issues of Congressional Quarterly, in which were printed the full transcripts of the four debates between Presidential candidates John F. Kennedy and Richard M. Nixon, held on September 26, October 7, October 13, and October 21, 1960. The four sections have been neatly stapled together, and cumulatively present 28 double-columned pages of text (with a large red X drawn across the extra pages on which no debate text appears). These were, of course, "historic" events in every sense of the word -- the first televised Presidential debates, and considered a landmark of politics in the era of television -- but what's most striking is how they so little resemble what are laughingly called "Presidential debates" today. Whatever your opinion might be of either JFK or Nixon, to read these transcripts is to encounter thoughtful, articulate men, who express their ideas and positions in complete, coherent sentences -- in an atmosphere as different from the entertainment/reality-show/sporting-event bloviation we're subjected to these days as can possibly be imagined.

Complete Texts of the Kennedy-Nixon Debates