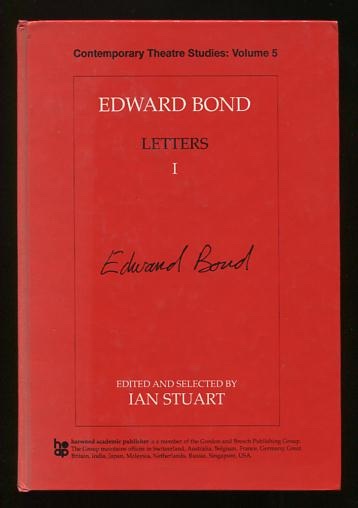 (laminated boards; no dust jacket) [moderate rubbing/scuffing to covers, top corners very slightly bumped]. (Contemporary Theatre Studies, Volume 5) Series "Beginning in the 1980s Edward Bond's dissociation with the established theatre was inevitable as many leading theatre, such as the RSC and the Royal National Theatre, produced plays antithetical to his belief in a new and useful theatre. Consequently, most of Bond's latest plays were not staged in London but given performances in the regions or abroad. This separation from the London theatre as a venue for his latest work along with Bond's interest in other European productions has resulted in a number of letters written to students and theatre professionals to explain and comment on the plays. The present collection is a selection of these letters." The letter are organized under four headings: Acting and Directing; Theatre Events; Politics; and Productions. "From reading this book the reader will experience new insights into the influences, motivations and beliefs of ths often misunderstood playwright." Laid in is a program for the American premiere of Bond's play "Tuesday," presented at the Stella Adler Academy Theatre in Hollywood, in October-November 1994.