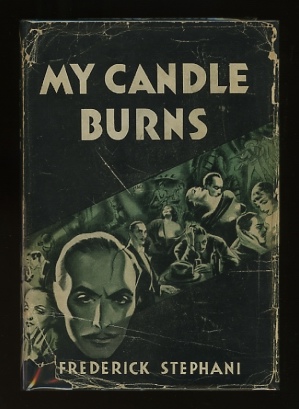 [solid clean copy, moderate shelfwear to bottom edge, extremely minor fraying at bottom corners (boards just a teensy bit exposed); jacket is heavily edgeworn, split about halfway up at rear hinge, various creases and tiny chips, paper loss at several corners and at spine extremities (a couple of letters of "Macaulay" lost at bottom), although with all that the front panel illustration is still attractive]. "In a simple and unpretentious way the author has his hero tell his own story -- a youth at the end of the war fighting for self-preservation in a distorted and chaotic world. Born to a high position and great wealth, having lived a romantic childhood, he finds himself a disillusioned wreck after war and revolution have swept away the glittering advantages." He moves through many worlds -- Europe during "its maddest hour--the inflation," the theatrical world of Paris, fortune-hunting in South America, involved in a Central American revolution, etc. It's hard to escape the suspicion that the book is somewhat (or more) autobiographical: like his protagonist, Stephani (1903-1962) was born in Germany and ended up in Hollywood, where by the time this book appeared he had already embarked on a not-terribly-distinguished career as a screenwriter and sometime producer-director (his most notable achievements being the first two FLASH GORDON serials and an Oscar nomination, for the original story in 1947 for IT HAPPENED ON FIFTH AVENUE, shared with the equally obscure Herbert Clyde Lewis. (The book's main character only gets to Tinseltown twelve pages before the end, just in time to work in a couple of clever cracks about foreigners in the film business, and an amusing scene where he inadvertently offends a character obviously modeled on Howard Hughes -- "a lanky youth of about six foot three, casually dressed in a golf suit," who turns out to be the producer of the film he's trying to get a job on.) The New York Times reviewer sniffed: "As a parody of the picaresque adventure story or of the smutty Continental novel, [this book] might conceivably get by. Neither the author nor his publishers, though, lend encouragement to any such notion, and one is forced to conclude that Mr. Stephani's preposterous tale is just plain bad."