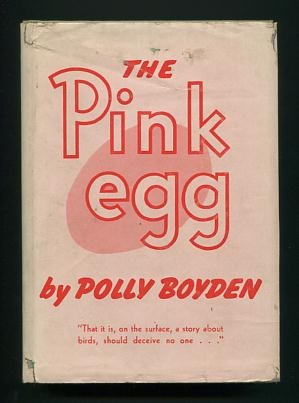 DETAILS NEEDED. World War II-era political parable, somewhat in the vein of "Animal Farm" -- "a story that is, at one and the same time, both symbol and adventure, actual and romantic, satirical and completely engaging." Oh, and did I mention that all the characters are birds? The hero is Roderick Robin Jr., marked as a rebel from birth due to his having hatched out of a pink egg; in the course of the narrative he defies his family and gets involved in the Sparrow Movement, which is fighting for a new social order that involves the redistribution of apple seeds. As radical writer/journalist Josephine Herbst describes the book in a long jacket blurb: "The cantankerous, reactionary, docile, cocksure and doubting characters that make up the bird society mock and illuminate the grown-up world of men. Bird families struggle to keep up with the Joneses, suffer the humiliation of a wayward son, connive to overawe their neighbors and to keep their husbands and wives." The author's extensive left-wing bona fides (civil rights activist, anti-Fascist protestor, mixed up with striking miners in Kentucky, traveled through the Soviet Union to see how the Communist thing was working out, etc.) are laid out in a long biographical sketch on the rear panel. Mrs. Boyden (nee Chase) didn't start out as a fire-breathing radical, though: she was born into a prominent Chicago family, married a young lieutenant (from another such clan) in 1918, divorced him in Paris in 1930, and remarried him in New York in 1939. This would appear to have been her only novel, although she had published a volume of poetry in 1930.