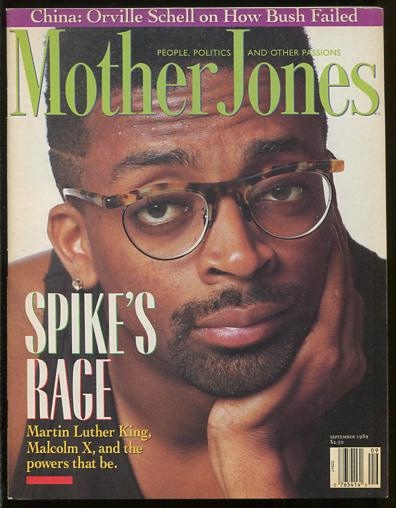 [nearly as new, extremely minor wear to the extremities; no address label, nor any sign that there ever was one]. (B&W and color photographs, ads, graphics) The cover story is about film director Spike Lee, and includes a long discussion and analysis of his then-current film was DO THE RIGHT THING. Also in this issue: a photo-essay, "Rites of Man," by Polly Brown; a tribute to journalist I.F. Stone; an article about Florida murderer Tom F. Sawyer; an article about the George H.W. Bush Administration's "too little, too timid, and too late" response to Tiananmen Squarecartoonist Matt Groening, who was just then poised for even more phenomenal success. The contents-page description of the article reads "The cartoonist who made angst-ridden bunnies funny brings his hostile humor to the tube" -- the "bunnies" line being a reference to the main character in the strip that first brought wide recognition to Groening's work, the angst-and-anxiety-ridden "Life in Hell." The LiH bunny (who I don't believe ever had a name) shares the cover with a character who was then about to rocket to animated-TV superstardom: the bratty-but-lovable Bart Simpson. "The Simpsons" had appeared, in somewhat cruder form, as short animated segments of "The Tracey Ullman Show" beginning in 1987, but it wasn't until December 1989 -- the very month this magazine appeared -- that Springfield's most famous dysfunctional family was given its own spin-off show, a move that was considered somewhat risky at the time. The cover posed the question of the moment: "Can Matt Groening's subversive humor survive prime time?" More than 27 years later, I think we have our answer. This was definitely one of Bart's earliest appearances on the cover of a national magazine -- possibly even the first, although this is unconfirmed. This issue of the magazine also contains a funny piece (with illustrations) by Lynda Barry, "The Telephone Call," about how a dog's throwing up set off a chain of events that caused a girl to be sent to a Catholic school, thereby ruining her life. But it's not all fun and sunshine: in true Mother Jones fashion there are also articles about the prospects for China's pro-democracy movement in the wake of Tianenmen Square, and about Silicon Valley's role in the depletion of the Earth's ozone layer (and how the electronics industry ignored one scientist's warnings about same). One last thing: a special "previews" section for Winter reading, including "a blueprint for writing the global novel" by Maxine Hong Kingston. All in all, a politically-infused cornucopia!