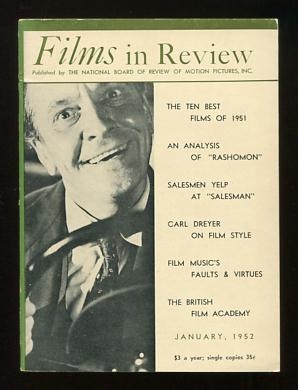 Films in Review (January 1952) [cover: Fredric March in DEATH OF A SALESMAN]

[nice clean copy, light rubbing to covers, minor wear along spine]. (B&W photographs) In this issue: the magazine's "ten best" of 1951 list, including capsule summary reviews of each film; an article about how "proponents of salesmanship" were expressing their dismay at the film DEATH OF A SALESMAN, claiming it "is disillusioning and hurts free enterprise" (they may actually have been right about that!); "Film Style" by the great Danish filmmaker Carl Theodore [sic] Dreyer, specifically discussing the creation of his film DAY OF WRATH; "Film Music Comes of Age," analyzing outstanding recent film scores; a brief history, by Roger Manvell, of the founding (in 1947), early years, activities, and status of the British Film Academy (now known as BAFTA, the British Academy of Film and Television Arts). Films reviewed in this issue include RASHOMON and DEATH OF A SALESMAN, and there is also a review of Richard Brooks's Hollywood novel "The Producer." ***NOTE that we have many more issues of this title (and other film magazines) in stock, and welcome your inquiries.

Title: Films in Review (January 1952) [cover: Fredric March in DEATH OF A SALESMAN]

Publisher: New York, National Board of Review of Motion Pictures: 1952

Films in Review (January 1952) [cover: Fredric March in DEATH OF A SALESMAN]