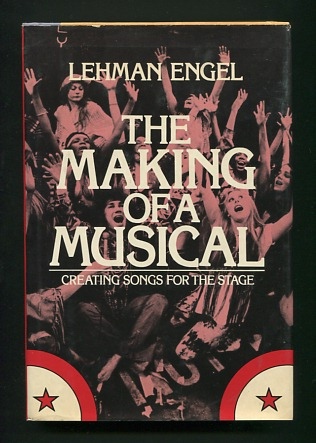 The Making of a Musical [*SIGNED*]

[minimal wear to book; jacket shows just a trace of wear along top edge, tiny tear at top front corner, a bit of yellowing/discoloration to rear panel]. INSCRIBED ("To Betty Garrett / With alllll love") and SIGNED by the author on the ffep, which also bears Ms. Garrett's rubber-stamped "ex libris" mark, within which is (presumably) her own signature. A behind-the scenes look at what makes a successful stage musical, by a Tony Award-winning composer/conductor who had a hand (usually as musical director) in the creation of a few classics of the genre himself, among them "Wonderful Town." In the book, which analyzes the success of many Broadway hits ("South Pacific," "My Fair Lady," "Annie Get Your Gun" and "The King and I" are all referenced in the jacket blurb), he "demonstrates how to choose the material for a libretto, explains what it's like preparing for the audition of a show, and displays the writing how-to's of composition -- from ballad to comedy song." Engel's association with the book's inscribee dates to the 1930s, when he was one of her instructors at New York's legendary Neighborhood Playhouse; they subsequently worked together professionally in the original Broadway production of "Call Me Mister," which led directly to Garrett being tapped for a contract with M-G-M, where she appeared in several memorable musical films, most notably ON THE TOWN (1949), before she and her husband, actor/singer Larry Parks, had their careers derailed by the Hollywood blacklist. Signed by Author

Title: The Making of a Musical [*SIGNED*]

The Making of a Musical [*SIGNED*]