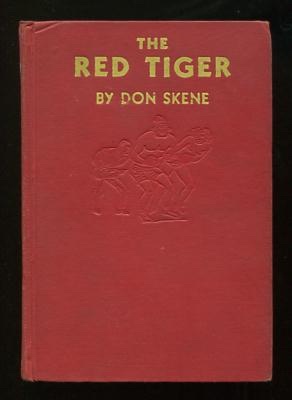 (no dust jacket) [moderately worn book, a little bumping at all corners, slight darkening of spine cloth, minor soiling to front and back covers]. (cartoon illustrations) Humorous novel about a scheming boxing trainer who takes a large but mild-mannered young fellow named Merle Gillingwater under his wing, rechristens him "The Red Tiger," and sets about to make him into a champ. "It took the good Doctor something less than a minute and a half of technical examination to realize that he had discovered no natural fighter, no unpolished diamond. Merle, at best, was a sort of marshmallow in the rough, but at least he was a big marshmallow. He had height, weight, the conventional number of arms and legs and a refreshing habit of blind and panicky obedience to his master's slightest whim." Even if it wasn't already tempting to call this sort of yarn "Runyonesque," by golly if there isn't an introduction by Damon Runyon himself, who dubs it "one of the grandest pieces of humor and satire that I have ever read," while lumping its young sportswriter-turned-author in with the likes of Ring Lardner and Charles E. Van Loan. Alas, Skene didn't last long enough to make much of this promising start as a comic litterateur: he died in 1938, at the age of 40, and "The Red Tiger" remains his only published book.