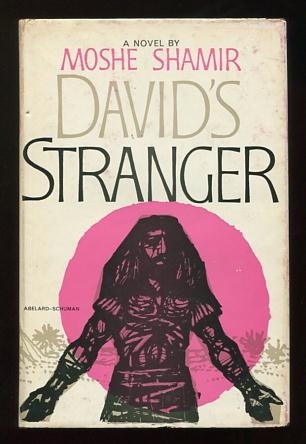 By: Shamir, Moshe (translated from the Hebrew by Margaret Benaya)

[good solid copy, slight bumping to top corners; jacket lightly rubbed and a bit soiled, very slight paper loss at several corners]. INSCRIBED (in Yiddish) and SIGNED by the author on the ffep. [See note at end of this description.] Historical novel dramatizing the murder of Uriah the Hittite by King David, "the climax of one of the ageless dramas of the Old Testament." Scarce novel (also known as "The Hittite Must Die") by one of Israel's most distinguished men of letters, who died in August 2004. He worked in many genres -- including drama, children's literature, poetry, essays, and literary criticism -- but was perhaps best known for his historical novels, several of which are metaphorical examinations of problems facing modern Israeli society. Initially a leftist, his political views underwent a great change after the Six-Day War; he served in the Knesset (as a member of the Likud Party) from 1977 to 1981, but broke with the party over the decision to return the Sinai to Egypt, and subsequently was a co-founder of the right-wing Tehiya party. He was awarded the Israel Prize in 1988, in recognition of his contribution to Israeli literature. [NOTE regarding the authorial inscription: although I do not myself read Yiddish, a bookselling colleague has kindly provided me with confirmation that the inscription does, in fact, include the author's signature, and that it appears to have been described in New York City ("Manhattan") in 1967. Please contact me if you would like to receive a scanned image of the inscription prior to purchasing the book.] Signed by Author

Author: Shamir, Moshe (translated from the Hebrew by Margaret Benaya)