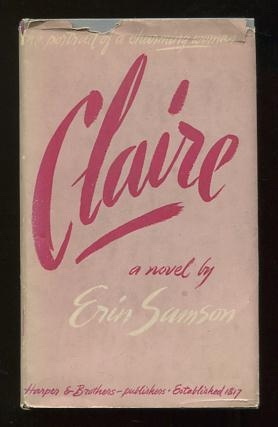 Claire; a portrait in motion

[minor shelfwear, light dust-soiling to top edge, faint bookseller's stamp (Bertrand Smith, Acres of Books) on front pastedown; jacket edgeworn, soiled, shallow chipping and a few small tears along top edge]. Novel about the career of a young dancer, prmarily set in Paris during the first quarter of the 20th century. The author, whose first (and apparently only) book this was, was (like her eponymous heroine) of mixed French and Irish-American parentage, and was both raised and educated on both sides of the Atlantic. In Paris itself, she advised and supervised girls from America who were spending their Junior years at the Sorbonne, while also leading her private life "among artists and writers, political groups from pure white to deep red, among educators and polyglot students and in the dim recesses of the Faubourg Saint-German."

Title: Claire; a portrait in motion

Claire; a portrait in motion