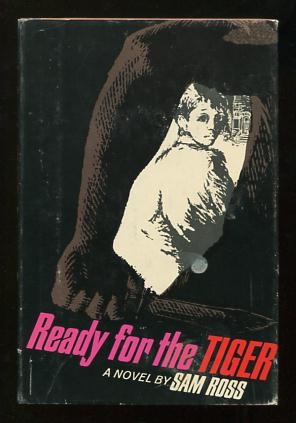 Ready for the Tiger [*SIGNED*]

[minor shelfwear to book, light smudge on bottom edge of text block near spine; jacket a little rubbed/scuffed, small light stain on front panel, a bit worn at extremities]. INSCRIBED generically and SIGNED by the author on the ffep: "Best ever / Sam Ross." Novel, set primarily in Venice, California, about a Korean War vet who carries out a revenge killing, then gets involved with a 13-year-old street kid and his 16-year-old sister (who's working as a prostitute). The author, a television writer and novelist whose best-known book was the 1951 novel "He Ran All the Way," lived in Venice himself for many years. This book was the basis for the 1982 French film LE GRAND FRÈRE, starring Gérard Depardieu, which as far as I can determine was never released in the U.S. Signed by Author

Title: Ready for the Tiger [*SIGNED*]

Ready for the Tiger [*SIGNED*]