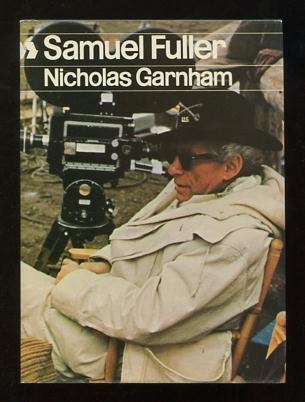 [nice tight clean copy, slight bump to bottom rear corner but no other significant wear; jacket just a tiny bit rubbed on the rear panelwith just a trace of shelfwear to bottom edge; similar very minor edgewear to jacket]. (B&W photographs) Engaging, thematically-organized (rather than film-by-film) examination of the work of one of American cinema's true originals. "This book is a labour of love," says the author in his introduction, "a love born in the dark womb of Sunday afternoon moviehouses in rain-drenched provincial towns and the seedier areas of London. This book is a culmination of an odyssey whose islands are ancient cinemas named Rex, Imperial, Tolmer, whose sirens are named Fuller, Boetticher, Siegel, Ray, Mann and Aldrich. To see in those half-empty moviehouses, smelling of damp clothes and nicotine, above the heads of sheltering old-age pensioners the images of House of Bamboo, Pickup on South Street or Merrill's Marauders was to come face to face with a cinematic presence that demanded recognition. This book records the process of that recognition." Sounds to me like he's got it right.