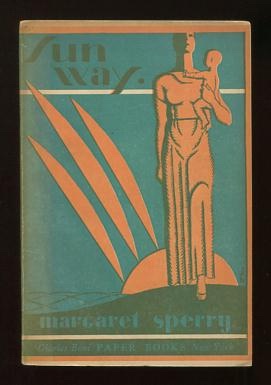 (printed wraps) [decent tight copy, age-toning and light soiling to covers and page edges, some fading at spine extending a bit onto both the front and rear covers]. Trade PB Novel set in Sweden, the life story of a girl's attempts to realize her ideals. (The author, although born in Chicago, had "spent the first few years of her life on the ancestral farm in Sweden," and thus was considered to be "writing of her own people and her own country.") This was the 14th regular issue of the "Boni Paper Books" publishing experiment, a monthly paperback-by-subscription service which had begin in September 1929 (following a prototype "for format" book issued in May 1929). In format the series was a precursor to the trade paperback, with an attractive look and feel and, often, cover designs by noted graphic artists (including Rockwell Kent, who designed the title-page graphic); in spirit it presaged the publication of mass-market paperbacks (which didn't begin in earnest until a decade later), in the sense that the publisher's motivation was to make quality literature more readily available to a less well-heeled public -- although the stock market crash that October probably unheeled a few more people than they'd counted on, and hampered the success of the venture. This particular volume is dated October 1930, which puts it very near the end of when the subscription requirement was dropped, the series was redubbed "Bonibooks," and the name of Charles Boni's older brother Albert was added to the title-page publisher's designation. (In this particular example it's still "Charles Boni Paper Books," and all the subscription information about the series is still present at the end of the book.) By the time the imprint was retired in 1936, more than sixty titles had been issued thereunder (including a number in hardcover or slipcased editions).