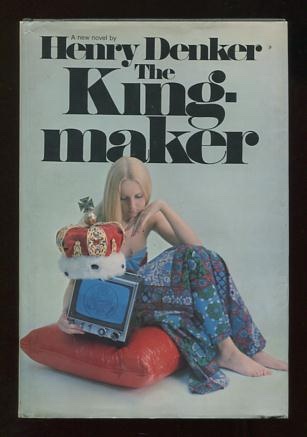 [heavy foxing to top edge, somewhat less on fore-edge, some soiling to book's covers, boards slightly warped, light musty smell; the jacket, however, has been affected by none of this, and is nearly flawless, with just a touch of soiling to the rear panel]. One of the more outrageous romans-a-clef in the annals of Hollywood fiction, a thinly fictionalized telling of the rise of MCA founder Jules Stein -- here "Dr. Irwin Cone" (nee 'Isidore Cohen"), who builds his "Talent Corporation of America" into a powerful media giant, and who eventually moves to protect his empire from charges of monopoly by his behind-the-scenes manipulation of an appealing has-been cowboy star into the governorship of (as they say) "a great Western state." This "novel of greed, lust, ambition, and the cynical perversion of power" depicts the ways in which Cone's Machiavellian ingenuity and cunning turn the actor, "Jeff Jefferson" (you fill in the real name here), into a full-blown political figure. One can only wonder if the author had an inkling in 1972 of what still lay ahead for Ronald Reagan, the real-life counterpart of Jeff Jefferson. (It's been rumored that there was an attempt at suppression of this novel -- certainly no one was likely to make it into a movie!) My favorite line of dialogue comes near the end, as one character speculates about the potential of the new Governor Jefferson, "Sometimes the man takes over the office. Sometimes the office takes over the man. I guess with him it'll depend on whether he' s playing a governor or being one."