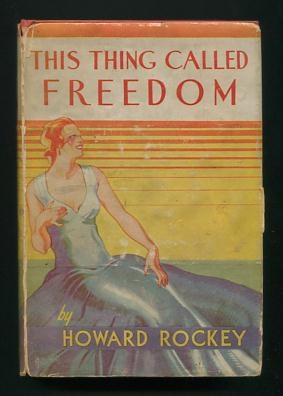 [ex-rental library book, with stamps of "Schoen's Circulating Library" on both pastedowns and bottom of text block; spine is turned, and there's a bit of soiling to the edges of the text block; the jacket is edgeworn, lightly soiled and somewhat faded, and in addition has been fully backed with brown paper (although unlike many books of this nature, the jacket flaps have not been glued to the book's covers]. According to the blurb on this book, New York's high society was divided between the Blue Book, "fast losing its power and prestige," and the Red Book, encompassing "the upper world of radio, journalism, advertising and the theater -- an upper crust of fast-living, quick-thinking aristocrats of action." The latter is the milieu of this novel: "From an advertising office with its vigorous men of action and its stunning secretaries, the story moves its breathless way to broadcasting studios, to pent-house jamborees, to night clubs and their chaotic pleasures, to the whirling pandemonium of a newspaper plant, hot with the latest scandals." The main character is "the headstrong daughter of a profligate hosiery manufacturer, [who] prefers the frank honesty of her father's favorite mistress to the cheating of her own stepmother."