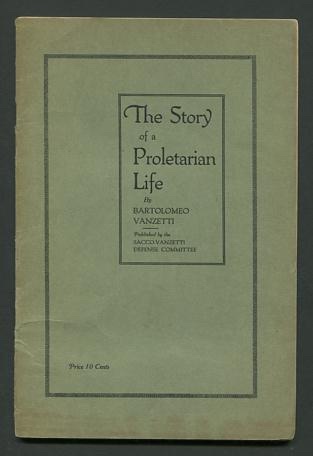 The Story of a Proletarian Life

By: Vanzetti, Bartolomeo (translated from the Italian by Eugene Lyons)

[a little discoloration to wraps, final page of text heavily tanned from contact with rear cover, small corner bends at bottom corners of pages in second half of the publication, bottom 2" of spine split (up to the lower staple, but both staples are holding firm)]. (frontispiece portrait) This brief autobiographical essay, one of dozens of writings generated by Vanzetti during his many years in prison prior to his execution in 1927, is considered to be "one of the most moving and humane writings of anarchism" ever published. 24 pages in length (plus covers), this version of the booklet was issued in August 1924, about ten months after several motions for a new trial for Sacco and Vanzetti had "been filed and were argued" (in October 1923) but had not yet been ruled on. (Their original conviction for their alleged involvement in the 1920 murders of two men during an armed robbery at a shoe manufacturing firm in Braintree, Massachusetts, had taken place in July 1921.) Although the precise bibliographic particulars of this printing can't be pinned down through online research, I've dubbed it a "second edition" based on the following facts: (1) As originally issued circa September 1923, this publication was only 20 pages in length, and contained Alice Stone Blackwell's preface but not the Upton Sinclair "Appreciation" included here; the latter was first published in the Boston (Sunday) Advertiser of September 16, 1923, in which Sinclair refers to having a copy "fresh from the press"; (2) The printing date of this copy is established by the precise dating of the prefatory note (August 15th, 1924), as well as by its reference to the new-trial motions that had been filed in October 1923 having not been ruled on "up to the date of this printing" (that would happen two months later, in October 1924); (3) There are no recorded library holdings of this item that bear a 1923 date and also include the Sinclair piece, from which I deduce that the Sinclair piece was not incorporated (under the heading "An Appreciation") until sometime in 1924, which also accounts for its expansion from 20 to 24 pages. Although I can't be sure whether or not there may have been other printings of this 24-page version earlier in 1924, it seems clear to me that the addition of the Sinclair piece and the resulting change in pagination fulfill the criteria for a "second edition," even if nobody else has ever called it that. [It might also be worth noting that this same version (24 pages, with Sinclair) was also issued in 1924 under the imprint of the "Sacco-Vanzetti New Trial League," which was an offshoot of the original S-V Defense Committee, formed by dissident members in April 1924; without research into primary sources, it's probably impossible to establish the precedence of one imprint over the other.] The impressively-detailed online finding aid for the Aldino Felicani Sacco-Vanzetti Collection (the largest archival collection of materials related to the case, held at the Boston Public Library) was helpful in establishing some of the above dates and events, but unfortunately isn't quite specific enough to nail down the bibliographic points. Finally: given that the Sacco-Vanzetti case is one of the most thoroughly-analyzed (and hotly debated) events in American history, I realize it's entirely possible that these points HAVE been settled by some intrepid scholar-bibliographer of whose work I'm unaware -- so if there's any obsessive S-V know-it-all out there who'd like to contact, correct and/or chastise me for any of the above, email away!

Title: The Story of a Proletarian Life

Author: Vanzetti, Bartolomeo (translated from the Italian by Eugene Lyons)

The Story of a Proletarian Life