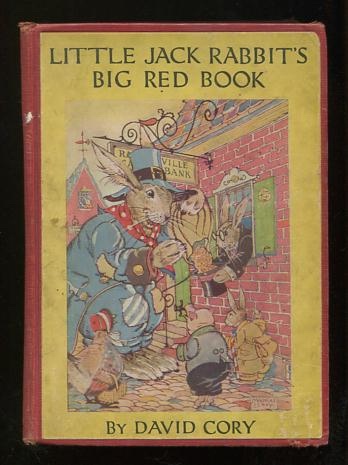 (pictorial front cover label; no dust jacket) [worn copy, external soiling, rear hinge cracked, fraying with exposure of boards at corners, tiny white stain at front joint, small nick in cloth at bottom edge of rear cover -- and SEE NOTES about enhancements and scribblings in text]. (color plates, line drawings) The author's second Little Jack Rabbit book (the first, the "Big Blue Book," was published in ____), presenting another visit to "Rabbitland, where Make Believe is the open sesame -- that state of mind in childhood which makes possible all things visible and invisible." This particular copy of the book provides an object lesson in why children need to be educated in the proper respect for, and handling of, books before they're allowed to get their grubby little hands on them, especially when said hands are holding writing implements of any kind. In the case of this poor book, it has clearly been subject to the creative ministrations of at least two children: one with some artistic sensibilities (for he or she has carefully crayon-colored the line drawings throughout the text to quite pleasing effect), the other a nihilistic heathen-child, clearly bereft of any sort of responsible parenting, whose "reading" of the book also involved the wanton wielding of a pencil and the consequent random defacement of various pages throughout the book. I have erased as much of this infantile scribbling as I could, but nonetheless numerous trace elements remain. There is at least some good news to report: the twelve color plate illustrations were apparently ignored by this beastly child, and are completely unblemished (except for some wild pencil doodling on the blank reverse of several of them, which, while unsightly, does not affect the lovely illustrations themselves, and which I have therefore NOT attempted to erase lest I risk loosening the plates); as noted, the crayoning-in of the line drawings is well and neatly done, and employing a reasonably thoughtful color pallette; and a few of the pencil scribblings (especially those on the rear endpapers) actually qualify as "drawings," and can even charitably be said to exhibit some nascent artistic aptitude on the part of their perpetrator. And speaking of perpetrators, the name of one such is written in the back of the book twice -- but since I can't be sure if this person (young Dorothy S-------) was the careful colorist or the mad pencil fiend (or even some innocent third party), I shall withhold her surname rather than risk shaming subsequent generations of her family -- or perhaps even the ex-child herself, who might well still be with us today, in her 90s. In which case I hope she's taught her grandchildren better book-handling manners than she had herself.