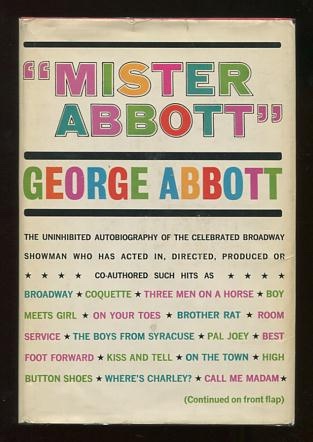 (price-clipped) [nice clean book, spine very slightly turned, miniscule bump to top front corner; jacket shows just a bit of edgewear, tiny puncture-tear in rear panel, a few tiny nicks and tears (rendered unobtrusive by new jacket protector)]. The "uninhibited autobiography of the celebrated Broadway showman," published when he was a mere child of 76, marking the 50th anniversary of his first appearance on Broadway. According to the jacket blurb he was then about to direct his 104th Broadway show -- and little did the world know that he would just keep on going, living -- and working -- to the ripe old age of 107. His final credit as director was on a short-lived revival of his own play "Broadway" in 1987, just shy of his 100th birthday (he had also directed the original production in 1927), but in the final weeks of his life he was still busy, working on proposed revivals of two of his biggest hits, "The Pajama Game" and "Damn Yankees."