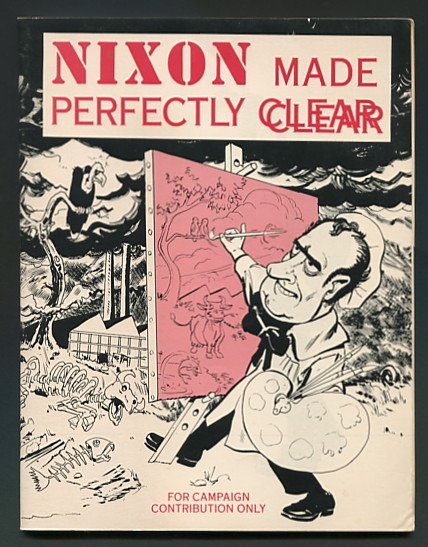 [bottom right and top right corners slightly bumped, no other signficant wear]. (cartoon illustrations) A satirical A-to-Z look at Nixon and his policies, e.g.: "M is for Minorities. As a member myself of a minority -- the Republican Party -- I am only too familiar with the frustration, discrimination and oppression suffered by minority groups. Believe me when I say that if I had my way there would be no minorities." Possibly my favorite, not least because of its great resonance for today: "S is for Secrecy. In my first inaugural address, I vowed that mine would be an open administration. I could have kept that promise had it not been for a plot by the media to confuse the American people with facts." In all these illustrations (uncredited to any artist), Nixon is depicted at his absolutely shiftiest. At the bottom of the front cover is printed "For Campaign Contribution Only"; although it's not indicated exactly WHOSE campaign this was issued in support of, I can at least assure you that not one cent of the purchase price of this fine piece of political-historical detritus will ever get anywhere near the coffers of CREEP. (Look it up if you don't get the reference.)