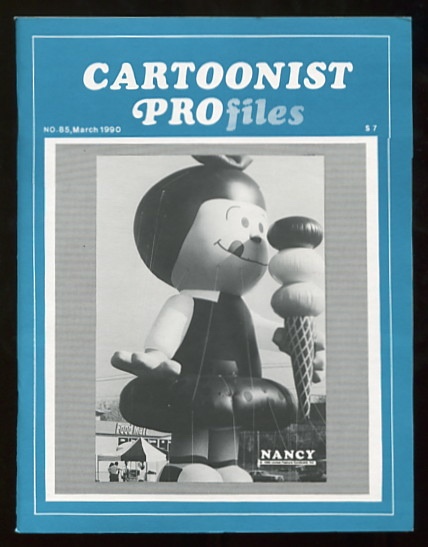 [nice clean copy with no significant wear]. (cartoon illustrations, B&W photographs) Featured in this issue: an article by cartoonist Jerry Scott, about the construction of a giant "Nancy" balloon for use in parades; an interview with Jay Kennedy, the Comics Editor of King Features Syndicate (including King's submission guidelines, in detail); an article by editorial cartoonist Jimmy Margulies, about publishing a book of cartoons; an interview with magazine cartoonist Glenn Bernhardt; a discussion about the creation of the then-new "Baby Blues" strip by its creators, Jerry Scott and Rick Kirkman; a review of Chuck Jones's autobiography, "Chuck Amuck"; an article by Jake Vest, about his "That's Jake" feature; an article about his views on cartooning by "Beetle Bailey" creator Mort Walker. All this stuff is interesting, of course, but in some ways the coolest thing in this issue is almost a throwaway: a brief article about the first-ever class in the Character Animation Program at CalArts, accompanied by a full-page group photo of the class taken in April 1976, including a number of people who would go on to major careers in animation, notably Pixar founder John Lasseter and directors Brad Bird and John Musker.