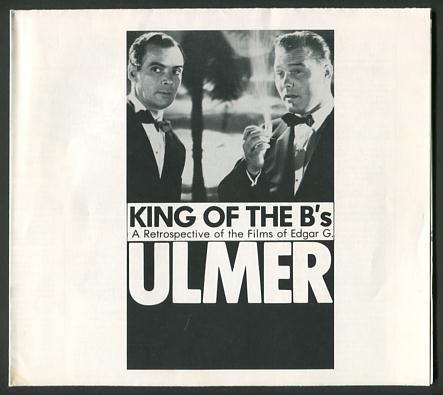 King of the B's: A Retrospective of the Films of Edgar G. Ulmer [program/poster]

[light handling wear, a little soiling to rear cover]. (B&W photographs) Full program for a retrospective of the work of the now-acclaimed (but then still pretty obscure) B-movie master, Edgar G. Ulmer, held at UCLA from October 6 through December 15, 1983. This item, printed on both sides of an 18" x 23" sheet and folded into sixths, doubles as a poster: on one side is the primary graphic for the event (including a photo of Ulmer himself) and the schedule of film screenings, with brief credits and notes on each film; on the other is a brief but erudite essay about Ulmer's work by Bill Krohn, plus information on a series of four seminars held in conjunction with the film screenings. The first major retrospective ever presented of Ulmer's films, this was a watershed event in the modern revival and re-assessment of his ouevre; for my part, I remember with great pleasure the appearance, at the opening-night screening of DETOUR, of the film's screenwriter Martin Goldsmith (who also wrote the original novel) and Ulmer's widow and collaborator (as script supervisor) Shirley Ulmer.

Title: King of the B's: A Retrospective of the Films of Edgar G. Ulmer [program/poster]

King of the B's: A Retrospective of the Films of Edgar G. Ulmer [program/poster]