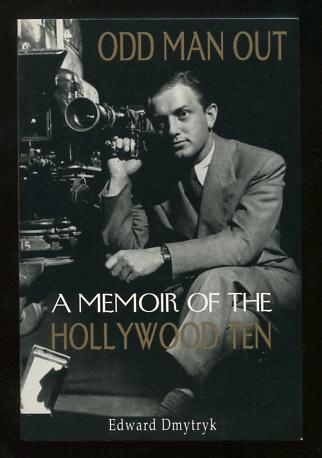 Odd Man Out: A Memoir of the Hollywood Ten

[slight bumping to corners of rear cover, otherwise nice and clean, virtually as-new]. Trade PB (B&W photographs) "In this personal and perceptive book, [the author] vividly chronicles the history of a particularly turbulent era in American political life while examining his own life before and after the events universally called the witch hunts. He details his brief membership in the Communist Party of America, explaining his initial commitment to what he perceived as communist ideals of civil liberties, economic justice, and antifascism, followed by his eventual disillusionment with the party as it betrayed those ideals. He goes on to provide a fair assessment of what then happened to him and the effect it had on the rest of his life. Dmytryk describes the activities, prejudices, and personal behaviors of all the parties enmeshed in the congressional hearings on communism in Hollywood. His reactions to other members of the Hollywood Ten and his recollection of conversations with them lend his book an immediacy that is not only informative but also absorbing." It's worth noting that when Dmytryk published his autobiography, in 1978, half of the Hollywood Ten (himself included) were still alive; by the time this book came out in 1996, he had outlived all but one (Ring Lardner Jr.).

Title: Odd Man Out: A Memoir of the Hollywood Ten

Odd Man Out: A Memoir of the Hollywood Ten