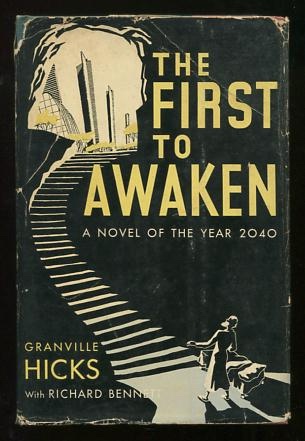 The First to Awaken

[good sound copy, light shelfwear to bottom edge, very slight bumping to top corners; jacket edgeworn and moderately soiled, small chip at top front hinge, 2-inch tear and associated creasing at bottom of rear panel, light staining to flaps, etc.] "A novel of the year 2040," in which "a typical American of our time takes advantage of a scientific experiment to sleep for a century," and when he wakes up he discovers, among other things, that "he recognizes with satisfaction the triumph of human intelligence." (I wish I could think that that's the direction we're heading in, but in fact I think Mike Judge's 2006 film IDIOCRACY will prove to be a better prognostication of our future.) Hicks, an influential Marxist literary critic throughout the 1930s, famously broke with the Communist Party in 1939 over the Hitler-Stalin alliance, and declared himself a democratic socialist.

Title: The First to Awaken

The First to Awaken