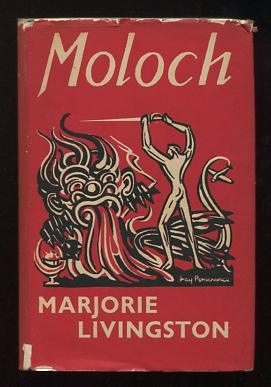 Moloch [*SIGNED* by the jacket illustrator and dedicatee]

[moderate shelfwear, spine a little turned, top front corner bumped, fading to cloth at top of spine; jacket shows wear and very shallow chipping along top edge, minor paper loss at lower left corner of front panel and at top of spine, light soiling to rear panel]. INSCRIBED and SIGNED on the ffep by Fay Pomerance, illustrator of the dust jacket, and also the person to whom the author has dedicated the book "in affectionate appreciation of her co-operation and understanding." (See below.) An unusual (and uncommon) wartime fantasy novel, about a two young men who meet untimely, war-related ends -- Vereker, an RAF pilot who's shot down in combat, and Carl, a half-German half-English Jew who's tortured to death in a concentration camp -- and team up in the afterlife to "sally forth on a quest, to destroy the idol of the World, the traditional Moloch, to whom through the centuries the Earth has offered the profane sacrifice of human lives. Their unique condition [i.e. being dead] enables them to chat with St. George, whose sword is drawn for England, in Parliament Square; to listen to a debate in the House of Commons and observe other mundane affairs in the revealing light of stark reality." Jacket illustrator Fay Pomerance (1912-2001) was a noted British-Jewish artist, who "experienced spiritual visions, which informed her dreamlike iconography and complex narratives," and who through her art was very concerned with questions of evil and redemption. Sounds like the perfect person to illustrate this particular dust jacket. The author (1893-?), a clairaudient, psychic writer and lecturer, delved often into the realm of fantasy, and is probably best known for her "Karmic Destiny" trilogy, published between 1944 and 1948, dealing with Atlantis and reincarnation. Signed by Illustrator

Title: Moloch [*SIGNED* by the jacket illustrator and dedicatee]

Moloch [*SIGNED* by the jacket illustrator and dedicatee]