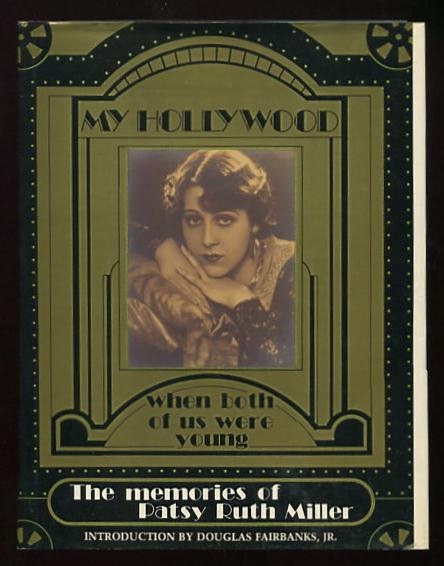 My Hollywood: When Both of Us Were Young: The Memories of Patsy Ruth Miller [includes "The Hunchback of Notre Dame" (see notes)] [*SIGNED*]

[nice clean book with no discernible wear; jacket has some minor wrinkling/creasing along top edge of front panel and bottom edge of rear panel]. (Ackerman Archives Series, Vol. III) Series (B&W photos, other illustrations) INSCRIBED and SIGNED by the author on the ffep: "To ____ / With best wishes / from / Patsy Ruth Miller / Dec 3, 1988." Autobiography of the silent screen actress, best remembered for her role as "Esmeralda" in the 1923 version of THE HUNCHBACK OF NOTRE DAME, opposite Lon Chaney. Introduction by Douglas Fairbanks, Jr. This memoir was belatedly "discovered" in 2016 by writer Richard Brody, who wrote a laudatory piece in The New Yorker headlined "A Brilliant, Unknown Memoir About Classic Hollywood," in which he praised Miller's "seeming total recall, a photographic and phonographic memory that vigorously and artlessly conjures an era and its conflicts through the accretion of surprising details and precise, incisive observations." (He fails to mention, however, that this handsome and hefty volume is actually two books in one, the second half consisting of Philip J. Riley's "reconstruction" of THE HUNCHBACK, essentially a reproduction of the original annotated script of the film's director, Wallace Worsley, along with much of the film's original promotional material, numerous stills, etc.) Laid in to the book is the program issued in connection with a screening of THE HUNCHBACK at which Ms. Miller was in attendance, presented by Hollywood Heritage on the same date as her inscription. ***NOTE that additional shipping charges for this heavy book will apply for non-U.S. customers; if this concerns you, please contact us for a shipping quote before placing your order.*** Signed by Author

Title: My Hollywood: When Both of Us Were Young: The Memories of Patsy Ruth Miller [includes "The Hunchback of Notre Dame" (see notes)] [*SIGNED*]

My Hollywood: When Both of Us Were Young: The Memories of Patsy Ruth Miller [includes "The Hunchback of Notre Dame" (see notes)] [*SIGNED*]