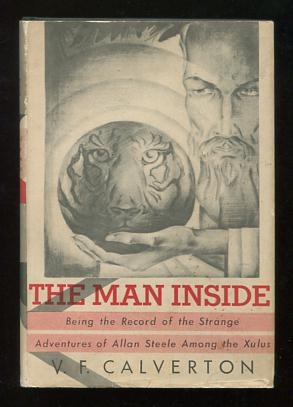 The Man Inside; being the record of the strange adventures of Allen Steele among the Xulus [*SIGNED*]

[very nice book, clean and tight, thin diagonal scrape mark across top edge of text block (light scrape on red topstain); jacket lightly edgeworn, a couple of tiny closed tears at top of rear panel INSCRIBED and SIGNED by the author on the ffep: "To Upton Sinclair / one of America's / very best / V.F. Calverton." The second (and last) novel by this radical writer and literary critic, who died at the age of 40 in 1940, this is a utopian-fantasy sort of tale about an American scientist who's taken himself off to the deepest jungles of South America in order to conduct hypnosis-based experiments on both animals and people, in an attempt to figure out just what makes people tick and then employ that knowledge for the betterment of mankind -- in other words, with the usual best visionary-scientist intentions, which ultimately lead to the usual unintended consequences. (As the New York Times reviewer noted, the protagonist "is no Dr. Moreau or fanciful magician given to hocus-pocus. His experiment is a preparation for a theory of society; the conclusions he reaches in the jungle he intends for the race.") Calverton (born George Goetz) was the founder of the literary journal "The Modern Quarterly," and was a frequent contributor to such publications as "The Nation" and "The New Republic"; most of his published work was criticism in one form or another. Signed by Author

Title: The Man Inside; being the record of the strange adventures of Allen Steele among the Xulus [*SIGNED*]

The Man Inside; being the record of the strange adventures of Allen Steele among the Xulus [*SIGNED*]