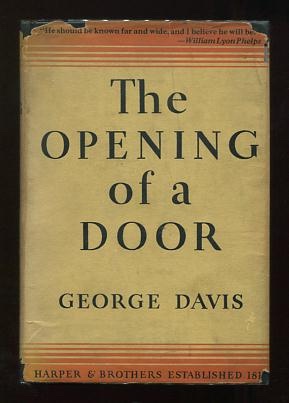 The Opening of a Door

(price-clipped) [slight bumping and light wear to spine ends, otherwise a solid unblemished book; jacket a little tattered, with paper loss at outer corners of front panel and surrounding both ends of spine, general soiling, browning to spine, horizontal tear/split in middle of spine (with a teensy bit of paper loss)]. This novel, the author's first, written when he was just twenty-four, earned a place in Anthony Slide's reference guide "Lost Gay Novels," but in this case "hidden" might be more appropriate than "lost." Even Slide himself admits that the book's gay characters, young Edward and his Uncle Daniel (from San Francisco!), are "shadowy figures," and that "the reader is provided with inadequate evidence" of their homosexuality. Basically a family drama set largely in the author's native Chicago, the novel was praised rather extravagantly at the time of its publication -- the jacket blurb (quoted from Lloyd Morris) puts Davis forth as "a writer of authentic genius . . . a poet who writes the most vigorous, beautiful prose that has been produced by any American of our time"(!), and the New York Times headlined it as "a brilliant first novel" -- but nonetheless it was both Davis's first and last published novel. He didn't exactly fade away -- he had a long and influential career as a magazine fiction editor, a sponsor and champion of young writers (among them Truman Capote and Ray Bradbury), and the second husband of Austrian singer/diseuse Lotte Lenya -- but despite its having been one of the most widely praised books of its year, "The Opening of a Door" doesn't seem to have ever been reprinted, and has fallen into obscurity. In "Playing the Game," Roger Austen lumps the book together with several other novels of the period in which "homosexuality pales from the shadowy treatment." (There's that s-word again.) A somewhat unkind assessment, perhaps, but at least Davis gets a mention, which beats his almost total lack of presence in most surveys of gay literature. (Fun fact: the character "Boaty" in Capote's "Answered Prayers" is a satirical portrait of Davis.)

Title: The Opening of a Door

The Opening of a Door