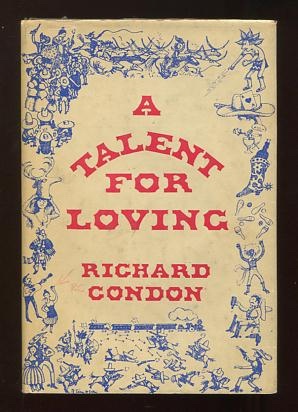 A Talent for Loving [*SIGNED*]

[one-time owner's small bookplate on ffep, some discoloration to half-title page (probably from a newspaper clipping, once laid-in but now vanished); jacket lightly browned at spine, with some minor soiling]. INSCRIBED and SIGNED in large red-ink letters by the author on the front pastedown. "The cowboy novel to end all cowboy novels," in the author's words, a "non-historical comedy," about a couple of fellows competing to win the hand of the nymphomaniacal daughter of a Mexican rancher. (A curse has been put on the ranch, you see, which is why she's nymphomaniacal in the first place, and the only way her father can lift the curse is to marry her off.) Adapted into the 1969 film of the same name, starring that well-known comedy duo Richard Widmark and Chaim Topol, with Condon himself doing the screenplay. Supposedly the property was once proposed as a movie vehicle for The Beatles, but they chose to make HELP! instead, for which I think we all ought to be forever grateful. Signed by Author

Title: A Talent for Loving [*SIGNED*]

A Talent for Loving [*SIGNED*]