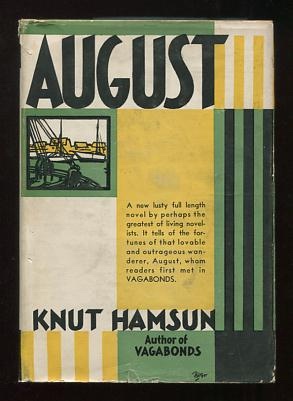 By: Hamsun, Knut (translated from the Norwegian by Eugene Gay-Tifft)

[good solid book with minimal shelfwear to bottom edge, vintage bookseller's label (Paul Elder & Co., San Francisco) on rear pastedown; jacket a bit edgeworn and lightly soiled, with a handful of tiny nicks and edge-tears]. First American edition of this late work by the great Norwegian writer, recipient of the 1920 Nobel Prize for Literature. It's a continuation of the saga of the title character, introduced in Hamsun's 1927 novel "Wayfarers" (published in America as "Vagabonds"); his next book, "The Road Leads On" (1933), completed what's known as "the Wayfarers trilogy" or "the August trilogy." In this one, August, "the wild and unscrupulous, yet ever generous wanderer, returns after twenty years to his home in northern Norway." Jacketed copies of the American editions of Hamsun's books are surprisingly uncommon.

Author: Hamsun, Knut (translated from the Norwegian by Eugene Gay-Tifft)