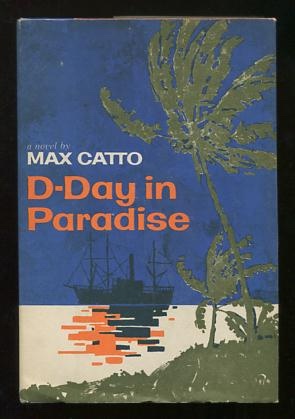 [a few shallow dents in bottom edges of boards, otherwise a nice clean solid copy with minimal shelfwear; jacket shows some light soiling on the rear panel]. Novel set in the South Pacific, about a Dutch tramp-steamer captain who "rescues" a mysterious prisoner who's being held in chains in the hold of another ship, and gets a lot more than he bargained for. "Red, the prisoner, turns out to be a mercenary soldier, a trouble-maker, a womanizer. But on Christ's Island, with its idyllic Christian community, Red's diabolical genius becomes useful when the island is invaded by civilization in the form of an international task force setting up an airstrip." The jacket blurb notes that "most of [the author's] novels have become motion pictures" -- among them "Mister Moses" and "The Devil at Four O'Clock" -- but this one never made it to the screen. Too bad, too, since the character of Red sounds tailor-made for Robert Mitchum, who had starred in two previous film versions of the writer's work, FIRE DOWN BELOW (1957) and MISTER MOSES (1965). Uncommon in hardcover. (And by the way: the title notwithstanding, the book does not take place during World War II.)